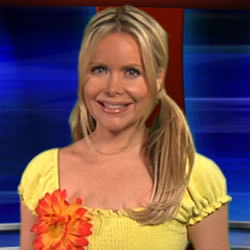 Tamara is a true advocate for the environment and health & fitness. Green T is a nationally recognized eco-TV host. She has worked for various television shows and a former WB and Fox evening news anchorwoman who has graced audiences for the last twelve years with extensive coverage of red carpet and green carpet events for the film festival circuit, award shows and eco-green events.

She has also appeared on The Tonight Show, Access Hollywood, Oxygen, Style Network, Bravo, and USA Network. In her newest venture, she is the co-creator, with her partner Kevin Carr, and host of “GreenTwithTamara.TV” Green T is all about raising consciousness and the environment. Tamara often asks people her famous question, “What does being green mean to you?” The Green T webisodes are popular among people who enjoy a non-political, eco-friendly, entertaining and conscious perspective on environmental issues. The webisodes can be seen on her Video page.

Tamara is a registered producer at Discovery Communications, having co-produced a film currently on the Military Channel, and is a comedy reality star along with her dog “Jimmy Chew” on Animal Planet.

Tamara is dedicated to conscious entertainment and is an activist for environmental causes. Her best friends have been calling her “Green T” because of her commitment to everything Green. Tamara truly walks the talk, as she has been roller-blading, carpooling and taking public transportation to get around L.A. for the past nine years. Green T is all about HOPE – Healing Our Planet Earth.
Support Us