Welcome to the Sun Learning Section 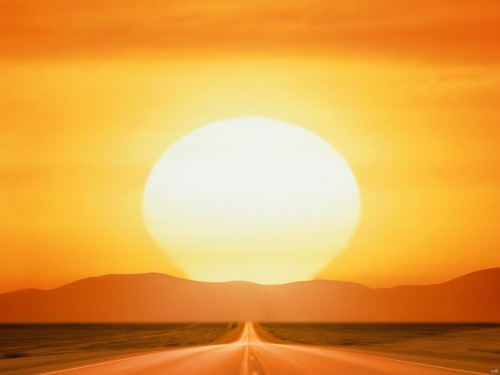 SUN - is the star at the center of the Solar System. It is almost perfectly spherical and consists of hot plasma interwoven with magnetic fields. It has a diameter of about 1,392,684 km,[5] about 109 times that of Earth, and its mass (about 2×1030 kilograms, 330,000 times that of Earth) accounts for about 99.86% of the total mass of the Solar System. Chemically, about three quarters of the Sun's mass consists of hydrogen, while the rest is mostly helium. The remainder (1.69%, which nonetheless equals 5,628 times the mass of Earth) consists of heavier elements, including oxygen, carbon, neon and iron, among others.

The Sun formed about 4.6 billion years ago from the gravitational collapse of a region within a large molecular cloud. Most of the matter gathered in the center, while the rest flattened into an orbiting disk that would become the Solar System. The central mass became increasingly hot and dense, eventually initiating thermonuclear fusion in its core. It is thought that almost all other stars form by this process. The Sun's stellar classification, based on spectral class, is G2V, and is informally designated as a yellow dwarf, because its visible radiation is most intense in the yellow-green portion of the spectrum and although its color is white, from the surface of the Earth it may appear yellow because of atmospheric scattering of blue light. In the spectral class label, G2 indicates its surface temperature of approximately 5778 K (5505 °C), and V indicates that the Sun, like most stars, is a main-sequence star, and thus generates its energy by nuclear fusion of hydrogen nuclei into helium. In its core, the Sun fuses 620 million metric tons of hydrogen each second.
We ask you to please donate to the Big MaMa Earth Learning Academy an environmental solution based non-profit. Your donations will be utilized for continuing education about the “Sun” and other important issues.
Donate
<
>