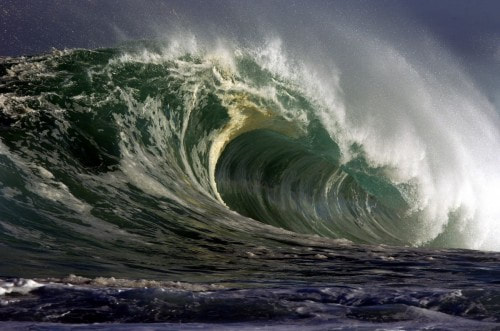 Acidification - the oceans are normally a natural carbon sink, absorbing carbon dioxide from the atmosphere. Because the levels of atmospheric carbon dioxide are increasing, the oceans are becoming more acidic. The potential consequences of ocean acidification are not fully understood, but there are concerns that structures made of calcium carbonate may become vulnerable to dissolution, affecting corals and the ability of shellfish to form shells.

Eutrophication - is an increase in chemical nutrients, typically compounds containing nitrogen or phosphorus, in an ecosystem. It can result in an increase in the ecosystem's primary productivity (excessive plant growth and decay), and further effects including lack of oxygen and severe reductions in water quality, fish, and other animal populations.

Plastic Debris - Marine debris is mainly discarded human rubbish which floats on, or is suspended in the ocean. Eighty percent of marine debris is plastic - a component that has been rapidly accumulating since the end of World War II. The mass of plastic in the oceans may be as high as one hundred million metric tons. Discarded plastic bags, six pack rings and other forms of plastic waste which finish up in the ocean present dangers to wildlife and fisheries. Aquatic life can be threatened through entanglement, suffocation, and ingestion. Fishing nets, usually made of plastic, can be left or lost in the ocean by fishermen. Known as ghost nets, these entangle fish, dolphins, sea turtles, sharks, dugongs, crocodiles, seabirds, crabs, and other creatures, restricting movement, causing starvation, laceration and infection, and, in those that need to return to the surface to breathe, suffocation.
We ask you to please donate to the Big MaMa Earth Learning Academy an environmental solution based non-profit. Your donations will be utilized for continuing education and solutions for “Ocean Conditions” and other important issues.
Donate
Support Us