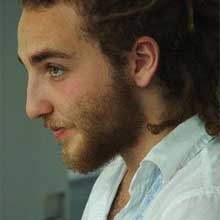 Matt Daly – Chief Creative Officer – Metaversatility – Virtual World Developer.​
Matt Daly is an advocate for the environment and one of the leading experts in the virtual world industry. He holds a B.A. in communication from Trinity University, and now holds an MFA in New Media at Austria’s Transart Institute.

Matt’s creative work blends the grammar of cinema with a love of digital artistry. His recent projects have explored rotoscoping animation, machinima, and associated visual motifs as tools for representing the boundaries between virtual and physical realities.

Matt served as both project manager and art director responsible for bringing the jazz station KRTU into the virtual world of Second Life. He continues to nurture the station’s listening community by organizing blended-reality performance events on the radio and in traditional concert venues.

His recent projects Done With Ephemera and Done With Redundancy have experimented with a variety of virtual spaces that can be used for art exhibition and virtual performance.

An avid gamer and skilled game designer, Matt has more than fifteen years of experience with massively multiplayer online spaces. He is the author of two adventure games, and served as the lead designer on the Ethyria project.