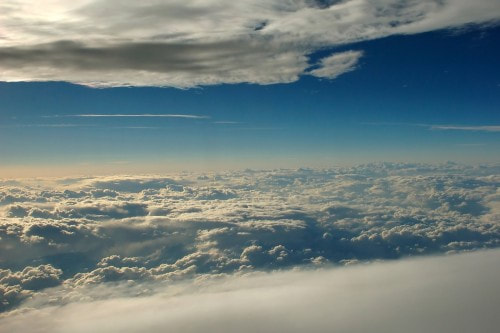 EARTH ATMOSPHERE - The atmosphere of Earth is a layer of gases surrounding the planet Earth that is retained by Earth's gravity. The atmosphere protects life on Earth by absorbing ultraviolet solar radiation, warming the surface through heat retention (greenhouse effect), and reducing temperature extremes between day and night (the diurnal temperature variation).

The common name given to the atmospheric gases used in breathing and photosynthesis is air. Dry air contains roughly (by volume) 78.09% nitrogen, 20.95% oxygen, 0.93% argon, 0.039% carbon dioxide, and small amounts of other gases. Air also contains a variable amount of water vapor, on average around 1%. While air content and atmospheric pressure vary at different layers, air suitable for the survival of terrestrial plants and terrestrial animals currently is only known to be found in Earth's troposphere and artificial atmospheres.

Air is mainly composed of nitrogen, oxygen, and argon, which together constitute the major gases of the atmosphere. The remaining gases are often referred to as trace gases, among which are the greenhouse gases such as water vapor, carbon dioxide, methane, nitrous oxide, and ozone. Filtered air includes trace amounts of many other chemical compounds. Many substances of natural origin may be present in small amounts as aerosol in an unfiltered air sample, including dust of mineral and organic composition, pollen and spores, sea spray, and volcanic ash. Various industrial pollutants also may be present as gases or aerosol, such as chlorine (elemental or in compounds), fluorine compounds and elemental mercury vapour. Sulfur compounds such as hydrogen sulfide and sulfur dioxide [SO2] may be derived from natural sources or from industrial air pollution.
We ask you to please donate to the Big MaMa Earth Learning Academy an environmental solution based non-profit. Your donations will be utilized for continuing education and solutions for “Earth's Atmosphere” and other important issues.
Donate
Support Us